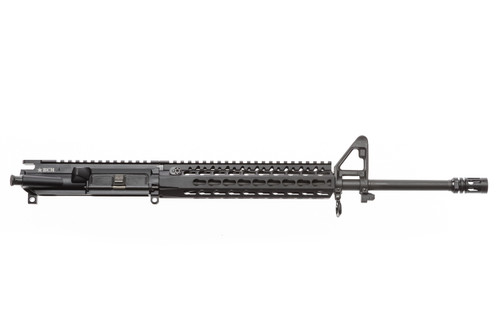 Bravo Company builds:  Life Saving Tools™
Manufactured by Bravo Company MFG, Inc. (BCM)
These Barreled Upper Receiver Groups are designed for shooting professionals and responsible civilians with the Mil-Spec features for the demands of their duty. They are fully assembled, headspaced, and test fired.
As a note: BCM barrel components are parkerized separately before assembly. Prior to shipping, all BCM upper receiver groups are test fired for function, laser bore sighted with a Milspec carry handle for sight alignment within Mil-Specs, and then batch samples are test fired for accuracy. As such, the upper receiver group will show handling marks consistent with these quality control procedures.
Cold Hammer Forged Barrels
This process of manufacturing barrels has been used for European small arms for generations, and it is gaining popularity in the United States because of the increased barrel life and outstanding accuracy of a hammer forged barrel. The BCM BFH series of barrels are made right here in the USA. (Just like all the BCM products.)
M4 Feed Ramp Barrel Extension and Upper Receiver
In developing the USGI M4 carbine as one of the primary weapons for today's infantry, some modifications were performed to the original M16 platform to enhance the reliability of the shorter barreled carbines. With the shorter carbine gas system and the increased gas port pressure, the carbine cycled faster, and at times the cycle rate could be faster than the magazine would feed ammunition. One of the modifications done to increase reliable feeding included enhancing the angle and the length of the feed ramps. This USGI modification was done to both the barrel extension and the upper receiver, creating a longer and steeper feed ramp. These Mil-Spec M4 feed ramps are part of the original CNC manufacturing process. As a result, the factory machined M4 feed ramps on the receiver are hard coat anodized which adds significant strength to the aluminum. This feature is offered on all BCM upper receivers and all BCM barrels.
T-Marked Upper Receiver
The contemporary M16/M4 rifle is built around the concept of modularity. All of the BCM flat top uppers feature a USGI type laser etched T-marks to provide addressing for the remounting of tactical accessories such as optics, laser sights, etc. This enables the weapon platform to be easily configured and then accurately reconfigured for each specific mission.
USGI 1/7 Twist Rate
The USGI 1/7 twist rate of all of the BCM barrels is the preferred twist rate by most professional infantryman. This twist rate has proven very versatile and can effectively run the new heavier 5.56 ammo that is hugely popular with military, private security personal, and personal defense for its' superior ballistics.
Mil-Spec Barrel Steel (Certified Mil-B-11595E)
BCM barrel steel is Mil-Spec per MIL-B-11595E, and is independently certified. This grade (CMV) of steel is a Mil-Spec steel used in the USGI M16 family of rifles; it is stronger and will last longer than the typical barrels offered in the commercial market. This Mil-Spec grade steel gets its' additional strength and rigidity from an increase in carbon and/or vanadium in the alloy. This will offer increased barrel life and performance through use in all types of extreme environments and temperatures.
Chrome Bore and Chamber
One of the first modifications that were made to the original M16 in the mid 1960's was the addition of the chrome lined bore and chamber. It is now a worldwide standard in the industry for a battle rifle. The chrome bore and chamber is harder than the barrel steel and will aid in chambering, extraction, and reliability. It increases velocity, and also resist against fouling and corrosion from extended use in the field. This gives the end user a longer barrel life with less required time in maintenance and cleaning.
Manganese Phosphate Barrel Finish
Barrels are parkerized with the manganese phosphate finish (Mil-Spec A-A-59267). Military specifications also state that the entire barrel surface is phosphate finished to create a porous surface to absorb oil as to resist against corrosion from the elements. BCM barrels are phosphated before installation of front sights. This is a much more extensive assembly operation, but insures that the entire barrel is finished and protected . . .even under the front sight base.
5.56 NATO Chambers
The USGI 5.56 NATO chamber is the best choice for effective deployment, reliability, and compatibility, of higher chamber pressures of military or high quality personal defense ammounition.
Mil-Spec F-Marked Forged Front Sight Bases
Mil-Spec for rifles issued to the troops require taller front sight bases on all flat top AR rifles. Many commercial offerings use M16A2 height front sight bases on all of their barrels regardless of what type of upper it is installed on. As a result, owners of rifles and carbines with the flat top receiver configuration can have problems getting a proper 'zero' for elevation with Mil-Spec back up iron sights. As all of the BCM uppers are built for flat top uppers, all have the proper Mil-Spec F marked front sight base to insure the correct height for iron sight zeroing when using military iron sights. Mil-Spec taper pins secure the forged front sight base with the sling swivel secured by tubular rivets.
HPT / MP Inspected Barrels
Military specifications require that barrels undergo a HPT (High-Pressure Test) load as a part of quality assurance procedures. Commonly referred to as a proof load, the M197 HPT is rated for 70,000 psi. BCM barrels are proof loaded and then MPI (Magnetic Particle Inspected) to detect any possible flaws in the barrels surface. The barrels are MP inspected with both circular and longitudinal magnetic fields per ASTME1444-01 (current Mil-Spec) to assure a high quality finished product. All BCM barrels are marked HP MP as our proof load marking.
Copyright 2010-2020 Bravo Company MFG, Inc.
***This product contains chemicals/materials known to the State of California to cause cancer and other reproductive harm. To learn more, visit www.p65warnings.ca.gov.***