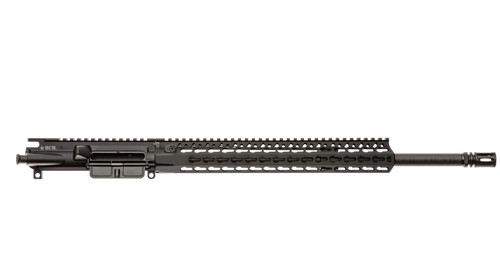 "Black Hills Ammunition has been making the most accurate and lethal 5.56 cartridges for years. In particular, their 77 grain OTM or MK 262 variants as its known in the military has performed without fail for over 20 years. I have used it myself and consider it lifesaving equipment.
As a military sniper I came into service when BH 77 grain was gaining favor with my community and also when my community began the concept of what's now known as the MK 12 5.56 light sniper rifle.
Over the years and through many rounds, testing and evaluations I, along with others, discovered that a twist rate of 1/7.7 is the absolute best for optimizing performance from Black Hills 77 grain ammunition. Now thanks to BCM® anyone can buy a complete upper tailor made for use with BH 77 grain variants."
Kyle Defoor
June 2017
Kyle Defoor is a professional shooter who teaches firearms and tactics to military, law enforcement, and civilians. Specializing in pistol, carbine, urban sniper, and CQB, Kyle gained his knowledge from decorated combat service in multiple war fronts as a special operator and as one of the first and premier tactical trainers in the world. An active motorcyclist, hunter, climber, runner, and waterman he can be seen on multiple TV shows, magazines, websites, and on ranges worldwide.