20 and 30 round capacity magazines CANNOT be shipped to: 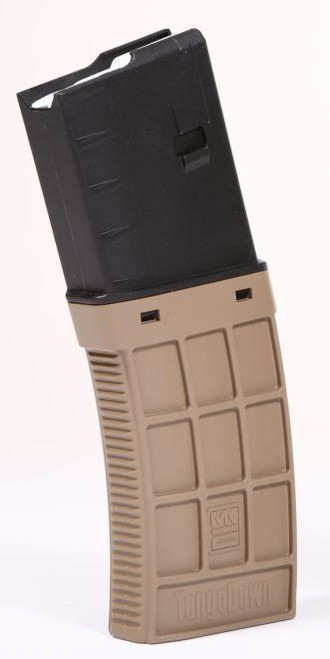 It started with a clean sheet of paper when TangoDown designed the ARC magazine. Traditional approaches were considered, but tossed out. Any feature that didn t push the magazine strength or reliability to new levels was left behind for someone else to use.

The TangoDown ARC MK2 magazine upper body features an advanced blend of N12 polymer. N12 exhibits superior strength & impact resistance when compared to common nylon 6 used in other commercial polymer magazines. It takes tough abuse in stride, with no cracked spines or feed lips even when dropped loaded on hard surfaces or seated with excessive force. N12 maintains this tensile strength and impact edge in temperatures ranging from -30 to +140 F, proven in multiple independent test lab reports against other polymer and metal magazines.

N12 is also superior to nylon 6 as it's dimensionally stable when exposed to moisture, meaning the magazine will not swell over time. Combined with the 2 piece/straight wall design, ARC magazines always fall free from the weapon with 100% reliability, guaranteed. Magazines can be fully loaded and store indefinitely with no feed lip spreading issues. N12 costs up to eight times more than nylon 6, but what would you rather trust your life to

Because of the tensile strength of N12 polymer, the ARC magazine can utilize the USGI pattern bolt catch cut instead of a V cut with no spine cracking. The V cut helps magazines with lower grade material survive...somewhat. But that creates bolt catch issues in some weapon systems. The USGI design allows ARC magazines to properly fit AR/M4 rifles & carbines as well as the SCAR 5.56 rifle, with no magazine modifications necessary to prevent expensive weapon damage. The smaller upper body can be created in a more efficient mold cycle, which means more feed lip and spine strength over one-piece body designs.

TangoDown permanently fuses the upper and lower magazine bodies together with high-strength aerospace-grade adhesives. The same stuff that holds fighter jets together. Cleaning becomes a snap, with no disassembly. Any debris that enters the magazine easily shakes out. Shooting the weapon suppressed Even caked-on carbon washes out with a quick soak in hot, soapy water. Rinse and you re done. Magazine maintenance has never been so fast or easy.

The tough, positive last-round lock back anti-tilt follower is slotted to allow any debris in the magazine to be shaken out. The follower is molded in high-visibility polymer and is driven by a premium quality, corrosion-proof 17-7 stainless steel spring that lasts beyond the life of the magazine body. Over 1300 loading/firing cycles have been recorded on a single magazine (that s over 39,000 rounds of ammunition!)

An integral ramp molded in the lower body automatically changes the follower attitude when loaded to capacity. This ensures the first 5 cartridges fired from the magazine are just as reliably fed as the last 5. This important feature was engineered and pioneered by TangoDown, but copied by others.

The ARC Magazine eliminated the traditional magazine floor plate to create a 5 sided box. This makes ARC one of the strongest, toughest magazines you can buy. It also means no floor plates to fail when dropped fully-loaded on concrete, or fighting tangled magazines inside your pouches during speed reloads.