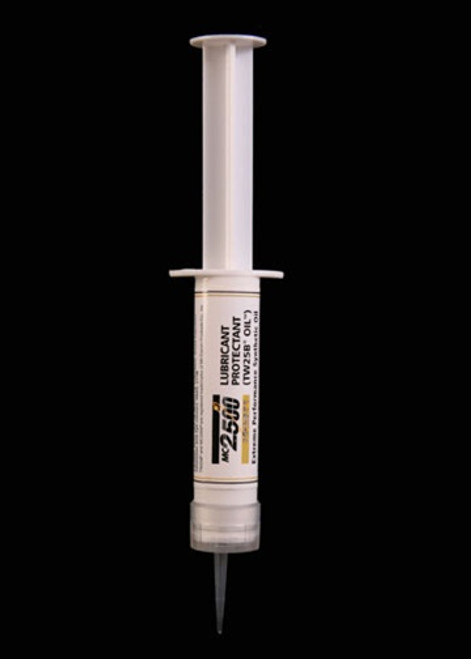 MC2500 oil is Mil-Comm Products synthetic blend that is based on the same technology and delivers the same exceptional performance as TW25B grease. The lower viscosity of MC2500 oil allows for easy migration to hard to reach weapon parts while its liquidity allows the user the ability to pour or pump the lubricant easily. These special characteristics of MC2500 oil make it outstanding for lubricating close-fitted, high-speed, extreme pressure precision parts. MC2500 is proudly MADE IN THE U.S.A. The 0.4 fluid ounce refillable syringe is ideal for treating hard to reach surfaces, such as trigger assemblies, and for dispensing drops or beads of oil into parts where a full disassembly is neither desirable nor practical.

TW25B Light Synthetic Grease is Mil-Comm Products original formula and a top selling firearms lubricant worldwide. Its exceptional performance in adverse conditions has made it the choice of the U.S. Military and its Allies. TW25B grease is proudly MADE IN THE U.S.A. The plastic, tapered tip reclosable 0.5 oz. syringe is handy for applying a drop or bead to small or hard to reach areas. The tip head rotates to open or close flow.

From its inception, the Company pursued a collaborative relationship with all branches of the U.S. Military, investing significant time and financial resources in R&D project work led by U.S. Air Force, U.S. Navy, U.S. Marine Corps, U.S. Army and U.S. Coast Guard program managers. By fielding veteran, expert weapons engineers to work directly with U.S. Military personnel, Mil-Comm has differentiated itself from other lubricant manufacturers the Company has consistently taken the long view, engineering and re-engineering its products based on specific criteria provided to it by U.S. military weapons system program managers.

As a result, the company's core formulation TW25B and its derivatives now play a vital role in the supply mix of extreme performance lubricants currently supporting weapon systems fielded by the U.S. Military and 12 US-Allied Militaries.

The United States Department of Defense has issued the Company 20 NSN s (National Stock Numbers) for the DoD supply system (with the same numbers also in use as NATO stock numbers).

In 2004 Mil-Comm was awarded a highly selective, Ten-year, Sole-source Requirements Contract for four of its extreme performance lubricants by the Defense Department's Defense Logistics Agency.

In 2006, Mil-Comm was awarded a Gold Medal for exceptional supply service and reliability from The U.S. Defense Department's Defense Supply Center.

Mil-Comm Products Company continues to build on its historically strong relationship with the U.S. Military through a combination of continuing product development, field testing and next-generation solutions.

MC2500 Oil is engineered with the same chemistry that distinguishes TW25B -- but it s specially formulated in a lighter oil viscosity. MC2500 delivers the same exceptional performance that TW25B grease is known for. Its lighter viscosity allows for easy migration to hard-to-reach weapon parts, such as trigger assemblies. Ideal for dispensing into parts where a full disassembly is neither desirable nor practical. Also excellent for general quick-lubrication replenishment to all parts. All synthetic, non-toxic.