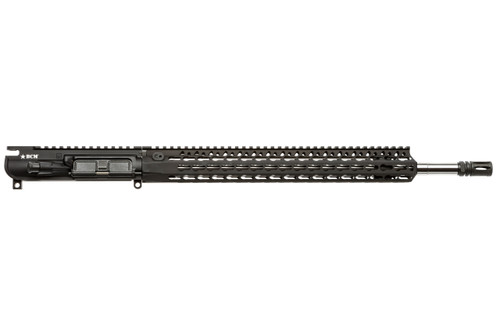 Bravo Company builds:  Life Saving Tools™
Manufactured by Bravo Company MFG, Inc. (BCM)
These Barreled Upper Receiver Groups are designed for shooting professionals and responsible civilians with the Mil-Spec features for the demands of their duty. They are fully assembled, headspaced, and test fired.
As a note: Prior to shipping, all BCM upper receiver groups are test fired for function, laser bore sighted with a Milspec carry handle for sight alignment within Mil-Specs, and then batch samples are test fired for accuracy. As such, the upper receiver group will show handling marks consistent with these quality control procedures.
Featuring BCM’s Patent Pending MK2 Upper Receiver
This proprietary design offers enhanced rigidity over the USGI product.  The increased rigidity limits barrel deflection which aids in consistency/accuracy.   Less flex also reduces premature damage, wear, and failure of bolt lugs from misalignment.   A gas expansion chamber is machined above the charging handle track, combined with dual vents machined at the rear (each side, above charging handle latch) help to redirect and vent gas away the shooters face.
SS410 Barrel Steel
This 18" BCM barrel is machined from SS410 stainless steel. Featuring hand lapped 1/8 twist rate button rifling and M4 feed ramps barrel extensions, the 410 stainless barrel gives the shooter the best balance of weight and accuracy. 410 stainless is also harder and more corrosion resistant than conventional 416 stainless found in other commercially available precision barrels.
M4 Feed Ramp Barrel Extension and Upper Receiver
In developing the USGI M4 carbine as one of the primary weapons for today's infantry, some modifications were performed to the original M16 platform to enhance the reliability of the shorter barreled carbines. With the shorter carbine gas system and the increased gas port pressure, the carbine cycled faster, and at times the cycle rate could be faster than the magazine would feed ammunition. One of the modifications done to increase reliable feeding included enhancing the angle and the length of the feed ramps. This USGI modification was done to both the barrel extension and the upper receiver, creating a longer and steeper feed ramp. These Mil-Spec M4 feed ramps are part of the original CNC manufacturing process. As a result, the factory machined M4 feed ramps on the receiver are hard coat anodized which adds significant strength to the aluminum. This feature is offered on all BCM upper receivers and all BCM barrels.
T-Marked Upper Receiver
The contemporary M16/M4 rifle is built around the concept of modularity. All of the BCM flat top uppers feature a USGI type laser etched T-marks to provide addressing for the remounting of tactical accessories such as optics, laser sights, etc. This enables the weapon platform to be easily configured and then accurately reconfigured for each specific mission.
5.56 NATO Match Chamber (USMC SAM-R Chamber)
The USGI 5.56 NATO chamber is the best choice for effective deployment, reliability, and compatibility, of higher chamber pressures of military or high quality personal defense ammounition.  The SAM-R chamber is the precision version of the 556 NATO chamber.
Copyright 2019 Bravo Company MFG, Inc.
***This product contains chemicals/materials known to the State of California to cause cancer and other reproductive harm. To learn more, visit www.p65warnings.ca.gov.***