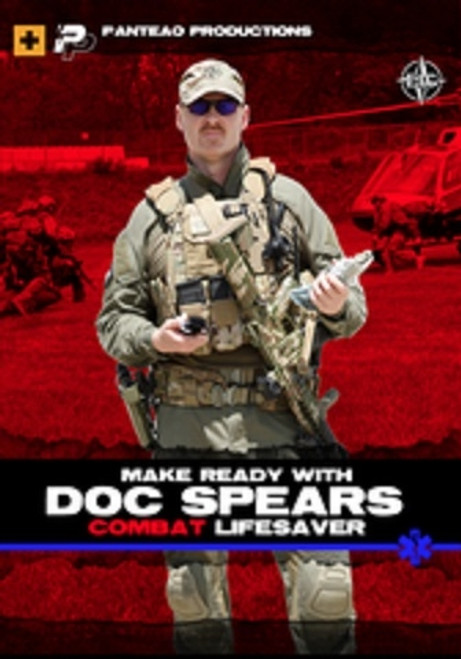 Combat Lifesaver is an introduction to the principles of Tactical Combat Casualty Care (TCCC), particularly the Care Under Fire (CUF) portion of the doctrine. The video is taught by John Doc Spears. Doc is an instructor for EAG Tactical. He started his career in the US Army as an 18D, Special Operations Medical Sergeant in 3rd battalion 7th Special Forces Group. He joined the 12th Special Forces Group while attending college, obtained a biochemistry degree, attended Osteopathic medical school, and then completed an orthopedic surgical residency and finally a spine surgery fellowship at the Cleveland Clinic Florida. In this video, Doc reviews care under fire, the individual first aid kit (IFAK), packing a wound and applying a battle dressing, tourniquets, hemorrhage, the airway, chest injuries, drag & carry, and more. This is a must have and must watch video if you are serious about first aid treatment and casualty care.

John Spears is an instructor for EAG Tactical. He is a weapons and tactics instructor, precision rifle, CQB Operations, No-Light, and TCCC instructor. His Army special operations career began as an 18D, Special Operations Medical Sergeant in 3rd Bn., 7th SFG(A), Panama. He conducted counter-insurgency and counter-narco terrorism operations throughout Central and South America, including El Salvador, Columbia, Bolivia, Peru, and others. He joined the 12th SFG(A) while attending college, obtained a biochemistry degree, attended Osteopathic medical school, then completed an orthopedic surgical residency and finally a spine surgery fellowship at the Cleveland Clinic Florida. After resuming consulting and training during the GWOT, Pat Rogers brought John into EAG as an instructor. He divides his time between a specialty surgery practice and training law enforcement, military, and qualified civilians.